Protothema.gr exclusively brings to light photos of the damage the Turkish warship ship Kemal Ries sustained after it carried out a risky maneuvre in front of the Greek frigate “Limnos”.

On August 12, Greece and Turkey came close to a hot incident when the Turkish frigate ” Kemal Reis”, accompanying the survey ship Oruc Reis, collided with the Greek frigate “Limnos” which was monitoring the movements of the Turkish flotilla in the area. 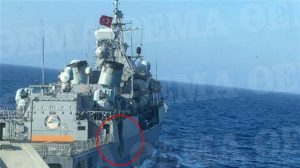 After the dangerous maneuver of the Turkish frigate that led to the collision with “Limnos”, the captain of the Greek ship Ioannis Saliaris informed the frigate fleet commander about the incident that had just occurred. The interception did not cause any damage to Limnos, but resulted in the Kemal Reis suffering a hole in the starboard. The Turkish frigate was to the left of the Greek one, so, according to the international navigation rules , it should have given priority to the Greek warship. 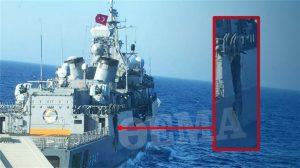 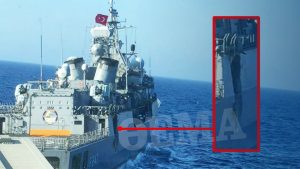