He was in Crete last week

Famous chef Gordon Ramsay was spotted at Super Paradise beach, in Mykonos, where the TV production of the show “Gordon, Gino and Fred’s Road Trip”, is continuing. The celebrity chef is trying out new Mykonian recipes with the background of the endless blue.

The production crew composed of 50 people, who traveled to Mykonos by boat, while some members of the production had already arrived in Greece in March, in order to scout for the shooting locations. 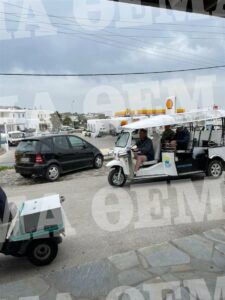 Early this morning Gordon was seen in a butcher shop with traditional Mykonian products, showing special interest in the Mykonos louza, the delicacy of the Cyclades, perhaps the best and most delicious sausage in the country with the chewy texture, which becomes even tighter as it cooks. 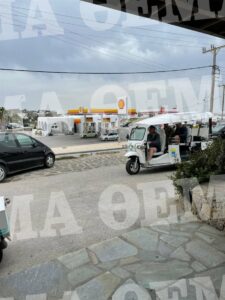 Gordon Ramsay, whose is reportedly worth over 200 Euros million, is not sparing any expense for the production costs, choosing for his travels to the Greek islands, a private jet which he chose to fly from Crete to Santorini, where he stayed in one of the luxury hotels of the Caldera Collection group for two days. He flew to Mykonos with the same jet. 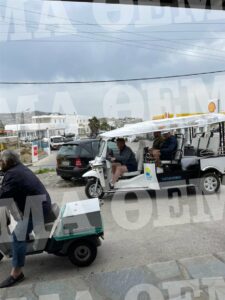 For his travels in Mykonos Town, he picked a tuk-tuk that belongs to the equipment that the production of his TV show brought along. It is the national vehicle of Thailand that was transformed by the Brit, who turned it into a 100% electric vehicle and was re-launched by the Netherlands. It was promoted in other European countries, including Greece.