Author of ‘My Ikaria’ Spiri Tsintziras’ love affair with the Greek island continues, encouraging people to embrace the ‘Ikarian way of life’

The enchanting island of Ikaria is not only one of the most idyllic islands of the eastern Aegean but also a dreamy place with authentic character and endless natural beauty, described by many as the place that offers the coveted gift of long life to those who choose to immerse themselves into its magic.

Small, unpretentious and certainly unhurried, Ikaria, with its crystal clear waters, beautiful caves, rocky cliffs, steep gorges and raw landscapes, might look similar to many other Greek islands but its exceptional population is the difference that makes this Greek island the subject of a number of scientific studies which have shaped its reputation. 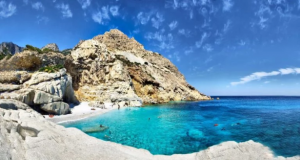 “The concept of time on this island is different from any other place in the world,” says Greek Australian author of My Ikaria, Spiri Tsintziras, who three years ago, found herself mentally, physically, and spiritually depleted and decided to visit the Greek island which, according to legend, was named after Icarus, the young man in Greek mythology who flew too close to the sun and plunged into the sea close to Ikaria.

“My quest for a healthier more nourishing life took me from my suburban home in Melbourne to the small Greek island of Ikaria where I explored and researched the traditional way of life that appears to gift its inhabitants with joy and an extremely long life,” says Spiri whose parents migrated to Australia in the 1960s from Kalamata and Kyparissia.

Combining the locals’ relaxed daily life with their exceptionally good genes one can understand why Ikaria is included in Dan Buettner’s book The Blue Zones: Lessons for Living Longer from the People Who’ve Lived the Longest which lists the five regions in the world where the local populations outlive their US and western European counterparts by an average of a decade: Italy’s Sardinia, Japan’s Okinawa, Costa Rica’s Nicoya Peninsula, Loma Linda in the US, and, of course, Ikaria. 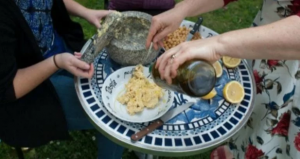 “Those islanders certainly have the secret not only to a long life but a good life as well, which is also evident in the extremely low rates of cancer, heart disease, depression and dementia that affect the island’s population.
“Even the elderly Ikarians are full of life, passionate and grateful to be alive and they certainly don’t waste a second of their precious time worrying about trivial everyday troubles,” says Spiri.

Aside from demographic surveys, scientific evidence confirms that another common trait of the elderly inhabitants of all the ‘blue zones’ is that they are unintentionally old.

“I remember one of the elderly locals confiding to me that the secret to his long life came down to the fact that he never worried about adding years to his life, on the contrary, he always ensured he added life to his years,” says the 47-year-old author. 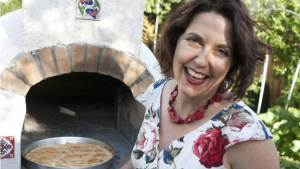 In addition to genes and their relaxed outlook, Ikarians maintain an active and quite physical lifestyle. Even their sex life is still considerably active and lasts deep into their 90s.

“To me, the Ikarian way of living is certainly worth exploring and I hope that by sharing my own personal journey through my book, I will inspire others to [engage] in the Ikarian way of thinking and enjoy a long happy existence,” says Spiri.

“Ikaria is certainly a magical place and the residents are blessed to live there, but that doesn’t mean that we can’t follow their example and learn from our ancestors.” 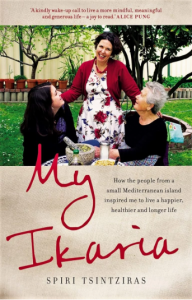 Further information about ‘My Ikaria’ is available at writingspirit.com.au/the-writing-spirit/books.html

Spiri Tsintziras is the author of ‘Afternoons in Ithaka’ (ABC Books, 2014) and co-author of the best-selling title ‘Parlour Games for Modern Families’ (Scribe, 2009), which won ABIA Book of the Year in 2010 and has been translated into Italian and Chinese, and converted into an app called ’50 Fun Games for the Whole Family’.