The Prime Minister Kyriakos Mitsotakis had the opportunity to see the diverse capabilities of the Armed Forces of Greece and seven allies of Greece on Tuesday during his visit the Andravida Air Base where he attend part of the multinational joint exercise “Iniohos 21″.

The Prime Minister, together with the political and military leadership of the Ministry of National Defense, had the opportunity to see up close part of the combative and deterrent power of the Greek Armed Forces. He welcomed the military representation of the friendly countries and watched impressive overflights and maneuvers of the fighter jets.

Mr. Mitsotakis also visited the place where the crews participating in the exercise are hosted and received as a gift a jacket with the insignia of this year’s exercise.

The Prime Minister also gave awards to the two winners in the Mixed Series of the School of Tactical Weapons for the years 2019 and 2020, Squadron Leaders Christos Petropoulos and Georgios Kontofakas, as well as Squadron Leader Anastasios Andronidakis, who won the title of “Best Warrior” at the NATO/TLP 2020. 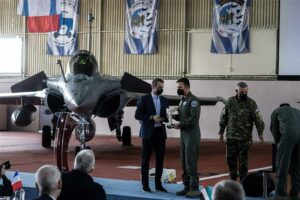 “Greece is a pillar of stability and security in the wider region. It is a protagonist in the struggles of the wider region, but also in the discussions. In defensive deterrence, but also in peaceful settlement. With its national interest and international law, being its permanent compasses”, stressed Kyriakos Mitsotakis in his statement.

“Greece will always promote a positive agenda, based on common values, compliance with international law and the law of the sea, the rules of good neighborliness and mutual respect that should always govern relations between modern countries. At the same time, we can not be naive. We are facing a new set of threats. Our world is extremely complex and our neighborhood, unfortunately, is becoming more unstable”, said the Prime Minister. “Greece will continue to strengthen its defense capabilities and upgrade its armed forces”, he added. 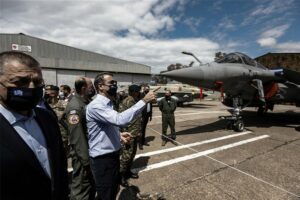 The annual exercise “Iniohos” reflects the strategic position of Greece in the wider Mediterranean Basin and its close cooperation with many countries in the region, with the aim of security and peacekeeping. The exercise takes place throughout the Athens FIR with the participation of Rafale and Mirage 2000D fighters from France, F-16 from the United Arab Emirates, F/A 18 Hornet from Spain, and F-15 and F-16 from Israel. The United States has sent F-16s, MQ-9 drones and KC-135 flying tankers. Canada is participating with CGI – Air Weapon Managers, while Cyprus has sent an AW 139 helicopter. Five more countries are participating as observers: Austria, Egypt, Jordan, Romania and Slovenia.