Edi Rama’s brother is the director of the team!

According to Himara.gr, in the football match of Partizan Tirana and Skenderbey Korce, the fans of the first placed a banner that has nothing to do with football.

“A Greek dead, one bastard less”, it reads being the continuation of the “nationalist delirium” as the Albanian Prime Minister Edi Rama has called it.

His brother Olsi Rama is Director of the Partizani Football Club.

The owner of the club is the infamous Gammend Demi, a member of the Chams’ lobby and a financier of their activities.

The banner is in reference to the incident that took place last Sunday, where a member of the Greek minority in Albania exchanged fire with Albanian police and got killed.

However, the exact conditions under which he was killed are not clear, as there are strong indications that the Albanian Police Special Forces executed him point-blank.

The incident has caused the further deterioration of the Greek-Albanian relations. 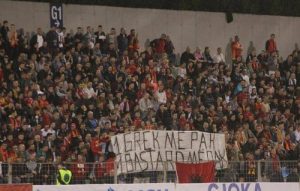