George Soros’s 220-page guide on how to create a permanent voting majority for the Democratic Party has been adopted by the Greek government!

As Greece struggles with accelerating economic decline and an increasing lack of public faith in the political leadership, the ruling Syriza coalition appears to be adopting a strategy of garnering votes from immigrants by expediting their naturalization process.

According to a recent report in the Greek daily Parapolitika, Interior Minister Panos Skourletis is laying the groundwork to enable hundreds of thousands of immigrants to become citizens and vote in the next elections. Although the mandate of Prime Minister Alexis Tsipras ends in September 2019, some analysts have been predicting a call for elections by the end of 2018.

Until now, candidates for Greek citizenship had to be vetted by a committee. Under the new system, applicants will be granted citizenship automatically if they correctly answer 20 out of 30 questions online. In addition, the government is planning to allow immigrants over the age of 65 to obtain Greek IDs, without testing their knowledge of the Greek language. In other words, it will be easier to obtain Greek citizenship than a Greek fishing license. As a result, a total of 800,000 immigrants — almost one-tenth of the native Greek population — will soon become citizens. Transposed to the United States, that would be the equivalent of 32,000,000 new voters.

In principle, the idea is no different from George Soros’s 220-page guide, released by DC Leaks, seemingly to create a permanent voting majority for the Democratic Party by “enlarge[ing] the U.S. electorate by 10 million voters by 2018.” 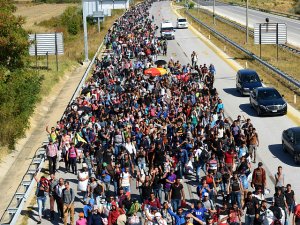 Easing citizenship requirements may be a calculated electoral ploy, but it is also in keeping with an overall European multiculturalism. The current leadership is not interested in the origins of the country’s illegal immigrants, many of whom hail from Afghanistan, Pakistan and sub-Saharan Africa and do not respect the Judeo-Christian roots and culture of modern Greek civilization. Nor does the government appear to concern itself with the danger involved in allowing huge numbers of migrants from terrorist-ridden Muslim-majority countries to become citizens, without vetting them.

Meanwhile, as its immigrant population increases, Greece is simultaneously undergoing a brain-drain. Over the past 8 years, for example, 500,000 skilled and educated young people left the country and have chosen to remain abroad rather than return home and contribute to the economy, the culture and society in general.

According to recent opinion polls, if elections were held in Greece today, the opposition party, New Democracy, would win. It is likely for this reason that the incumbent Syriza coalition has been stepping up its efforts to stay in power. Let us hope that its maneuver to do so by hastily granting voting rights to immigrants will fail. If not, the future of Greece and other countries where there are visible efforts to undermine democratic processes — as in America’s politicized, seemingly criminalized Department of Justice and Federal Bureau of Investigation and the efforts of U.S. Democrats to try to prevent the president from forming a government — could be dangerously bleak.