After 106 years, the Greek National Minority is experiencing a velvet ethnic cleansing by the EU-member-wannabe Albania

February 1, 1914 was a historic day for the fate of the Greek communities of Northern Epirus, a geographical region northwest of Greece, where Hellenism had flourished and suffered over the course of centuries.

February 1 was also a historic and momentous day for the islands of the Aegean Sea since these two areas were interrelated during these turbulent times. 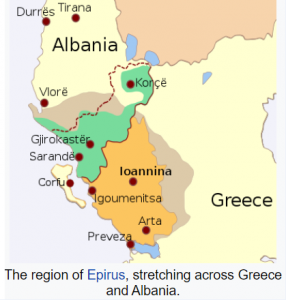 On that day, the then big powers of Europe sent a note to the Greek government.

These powers traditionally included Great Britain, France, Russia and other powerful states such as the Austro-Hungarian Empire, and Italy.

According to the note, Athens had to abandon its claims in northern Epirus, which was about to become part of the newly-established state of Albania, or Greece would not obtain sovereignty over the dozens of islands of the Aegean Sea.

This momentous yet widely unknown day, was when Greece was shaped in the way we know it up to this very day.

The Greek administration of Eleftherios Venizelos, knowing the strategic importance of the Aegean islands had to make a painful yet necessary compromise, if Greece wanted to expand its territory and influence in the broader Mediterranean Sea.

Thus, following the note which Athens received, Venizelos decided that it was in the country’s vital interest to withdraw its claim over the historic region of northern Epirus, in order to obtain the islands.

According to this consequential note, Greece would now legally obtain the islands of the Aegean Sea, with the exception of three: Imbros, Tenedos and Castellorizo.

However, Northern Epirus would remain outside of its motherland, forming a new province in the new state of Albania. 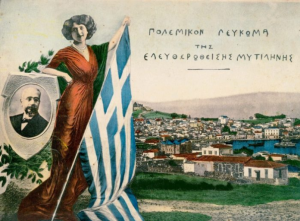 (A poster celebrating the liberation of Lesvos island)

Following the painful yet important decision of Venizelos, Greece was about to officially become the power which controlled the vast majority of the Aegean area.

This led to the Florence Protocol of February 13, 1914, which marked the Albanian borders, leaving Northern Epirus inside its territory but with an increased status of autonomy, something that Albania never respected.

The Greeks of Northern Epirus never accepted this outcome, and a few weeks later declared their independence, something that was never officially recognized.

Up until then, the Aegean islands, which had been liberated by the Greek navy between 1912 and 1913, were de-facto occupied by Greece, but no official treaty had recognized Greece’s sovereignty over them. 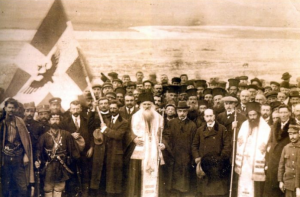 (Picture of the official declaration of Northern Epirote Independence in Argyrokastro in March 1, 1914)

With the note of February 1, 1914, Greece was tempted to receive the official recognition of its sovereignty over all these islands, provided that it ceased to make any territorial claims in Northern Epirus.

Of course, WWI soon broke out, and the Ottoman Empire’s persistent denial to accept that the Aegean islands were now Greek, led to the continuance of this strange situation, where Greece had liberated most of the Aegean islands, yet it wasn’t officially recognized as such.

This continued up until 1923, when finally the Treaty of Lausanne granted the islands of the Aegean –with the exception of the Dodecanese, Imbros and Tenedos– once and far all, to Greece.