Alien tourism appears to be gaining popularity around the world, and some offbeat travelers believe that a remote hilltop in Thailand holds the key to connecting with the extraterrestrial world.

Khao Kala in Nakhon Sawan — which translates to “City of Heaven” — is located just three hours north of the Thai capital Bangkok, and has become a hotspot for tourists looking to experience the supernatural.

Several news outlets, including CNN and Vice, have recently traveled to the area, where some people believe humans can telepathically communicate with aliens. 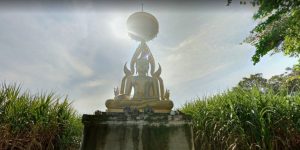 The hill is located amongst a sugar cane plantation, and, according to the Bangkok Post, believers in the supernatural site say it hides a secret wormhole that allows aliens to travel between different dimensions.

Believers practice meditation at Hill 145, where a giant Buddha statue sits below a statue of a seven-headed snake. Several other Buddhist statues, including one called “Buddha’s Footprint” stand nearby.

Somjit Raepeth, a member of Khao Kala group or UFO Khao Kala, a group that believes that the area possesses supernatural qualities, told the Post in 2015 that members practice strict Buddhist principles and were able to contact aliens from Pluto and another planet called Logu Kata Paka Tigong, located somewhere in the Milky Way.