UPDATE: The death toll has risen to 6 as five more people were found dead.

Four of them are sadly members of the same family.

A 12-year-old girl was found dead under the rubble by a 6.4 earthquake that struck Croatia’s capital, Zagreb, just 9 km from the town of Sisak on Tuesday afternoon.

According to information from the international news agencies ABC News and the Associated Press, buildings have collapsed, while there are reports of several injured.

According to the “Independent” in the area earlier, firefighters immediately rushed to free a person from a car, which was crushed by the rubble of a building. Rescuers managed to free a man with minor injuries from the car.

Croatian town of Petrinja suffered a lot of damage in the earthquake today pic.twitter.com/W7ypSFj5vR

Sisak is a river town and a port in Croatia. It is located on the banks of the Savo River, 57 km southeast of Zagreb. It is the capital of the province, a railway junction and a large industrial center with large oil refining facilities. 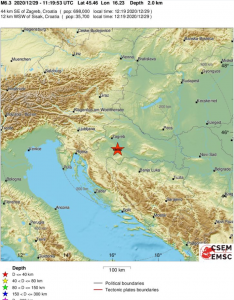 AFTERMATH: Video shows people rushing to help and emergency services arriving amid chaotic scenes in the immediate aftermath of a strong earthquake that hit Croatia on Tuesday. https://t.co/dxplPjuERx pic.twitter.com/DyHzJw0y5S

It is noted that a 5.2 magnitude earthquake had occurred yesterday at 7:28′ in the morning Greek time in central Croatia, 50 km southeast of Zagreb.

Turkish Press: Greek territorial water extension to 12 n.m in Ionian Sea is a cause for war

The Croatian Red Cross says there is a serious problem in the Petrinia region, with President Zoran Milanovic and Prime Minister Andrei Plenkovic rushing to the scene.

There are also problems with electricity supply in parts of Croatia, and the Slovenian nuclear plant has been shut down as a precaution.

Strong earthquake in Petrinja, Croatia (6,3 magnitude), felt in the Slovenian parliament, Ljubljana. I just hope and pray that there are no casualties!🙏 pic.twitter.com/lVFW63uXTO