A drunk driver who streamed herself on Facebook Live saying “f**k the police” while downing shots hours before she killed veteran Greek-American police officer Anastasios Tsakos, 43, in a hit-and-run in New York City boasted about carrying a knife “everywhere I go”, as it has been revealed.

The black woman, Jessica Beauvais, 32, posted a 1 hour and 51 minute livestream on her Facebook page Monday evening as part of her Face the Reality radio show where she addressed the trial of white ex-cop Derek Chauvin for the murder of George Floyd, slammed police officers and the justice system and played N.W.A song “F**k Tha Police”. 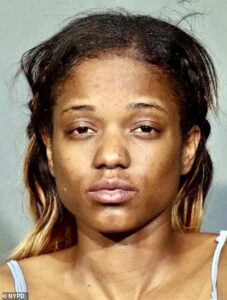 Throughout the video, Beauvais is seen vaping and drinking an unknown dark liquid from a plastic cup and, at one point, washes down the contents of a red shot glass with a bottle of Snapple. Police sources claim she later confessed to guzzling vodka, wine and smoking weed before the deadly incident.

Hours later, Beauvais allegedly got behind the wheel of her Volkswagen and plowed into the Greek-American NYPD Highway Officer Anastasios Tsakos, on the Long Island Expressway around 2am Tuesday morning. 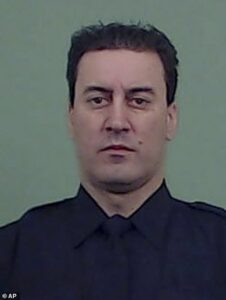 Anastasios Tsakos, father to a three year-old son and six year-old daughter, was rushed to a nearby hospital where he was pronounced dead.

Beauvais, who was intoxicated and driving with a suspended license at the time, sped away from the scene with a completely shattered windshield before being stopped by police.

Sources told New York Daily News she was almost double the legal alcohol limit for driving – registering a 0.15 on a Breathalyzer test – and was slurring her words and unsteady on her feet when cops arrested her.

She fumed at the arresting officers, telling them: “F**k you. I don’t have to listen to you”.

Police said Beauvais was driving despite having her license suspended in August 2019 for failing to pay for DMV fees.

She had previously been arrested on the same charge in 2015 and had her license suspended at least two more times.

Beauvais, who says she has a 13-year-old son in the video, later offered a tearful apology for Tsakos’ death as she was led out of the NYPD’s 107th Precinct in handcuffs on Tuesday afternoon. “I’m sorry that I hit him and that he’s dead”, she sobbed.

Just hours before the fatal encounter, Beauvais streamed the Facebook Live video at 6.37 pm on her social media account under another name.

Chauvin was found guilty on all charges for the Memorial Day murder of George Floyd last year after he knelt on the black man’s neck for more than nine minutes until he died.

The 32-year-old then went on to say that police officers are “signing up for potential death like in the army” and that it is “part of the job” that people “might try to f**king kill you”.

Beauvais also claimed that if she ever had a fatal encounter with police, she would make sure she wasn’t the only victim.

She told listeners: “Like (hip hop group) NWA say about the police – if you’re going to kill me, at least I get to take someone with me.

“I’m one of those people. If I’m going to go, someone is coming”. 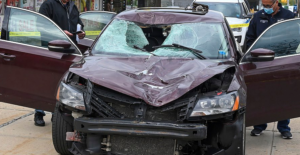 In the footage, she also spoke about her love of “weapons” comparing herself to the fictional DC character Harley Quinn and saying she always carries a knife.

“Maybe I’m a little Harley Quinn on the brain. I like weapons. I carry a knife with me everywhere I go.

“We can fight the police too. If you’re going to shoot me, get it over with. What I’m saying is you’re not going to try me while I’m still breathing”.

Beauvais goes on to say she doesn’t “believe in prisons” but believes in capital punishment saying “hang that b**ch.

“I don’t even believe in prisons. I literally believe in the eye for an eye, tooth for a tooth. If you guilty, blow his head off”, she says. “F**k is you here for. Why I gotta feed you? For what?”.

Speaking of her love of physical fighting, Beauvais continues: “What happened to fighting, I grew up on fighting. I like to fight. My hands and my feet and teeth.

“It does something for me – what does it do for you? F**king people up never stopped being a thing”.

“The pain she is going through, there is no words for”, de Blasio said.

“A few hours ago she was looking forward to seeing her husband again and now she won’t. (His children) will never see their father again because someone did the wrong thing. Here is a good man who won’t be home”.

Described as a “highly regarded officer”, Tsakos was a 14-year veteran of the NYPD.

“[Tsakos] did everything right in his life for us and he is dead because of other people’s negligence”.

He described the incident as “a very, very painful moment”.

Anastasios Tsakos was born in Greece and went to the USA in the 90’s. The brother of the unfortunate police officer, Lefteris, who lives in North Carolina, according to the “Newsday” newspaper, left immediately for New York.

The “Ethnikos Kirikas – The National Herald” contacted his wife and the bride of the deceased, Carol, who, obviously shocked, referred to the ethos of Anastasios.

“He was a lovable father, husband, brother and brother-in-law. He cared very much for everyone by nature.

“It is a very difficult time for us”, he said.

The also Greek-American police priest, Fr. George Anastasiou, spoke to “EK” who knew the deceased through their joint service.