A controversial tweet by a Cambridge University professor saying ‘White lives don’t matter’ has been deleted by Twitter, she has claimed.

Since posting, the professor has received death threats and abuse, while a petition was launched demanding that she be fired by Cambridge University.

It comes after a banner reading ‘White Lives Matter’ was flown over the Etihad Stadium in Manchester just after kick-off between Manchester City and Burnley on Monday night, sparking a police investigation. 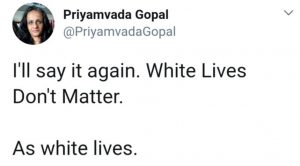 Prof Gopal later confirmed that the tweet had been deleted by Twitter, but said she stood by it as it was about “structure and ideology” rather than people.

She wrote: “I would also like to make clear I stand by my tweets, now deleted by Twitter, not me.

“They were very clearly speaking to a structure and ideology, not about people. My Tweet said whiteness is not special, not a criterion for making lives matter. I stand by that.”

The academic and activist also shared abuse she had been received both publicly and privately following the tweet.

One person replied saying she was “disgusting inside and out”, and, “[i]f you don’t like white people, pack up your sh*t and go home. Problem solved.”

Other examples included: “…On another note, kill yourself. Else someone might show you which lives really Matter :)”

“Why would you want to abolish whiteness anyway, we’ve given you everything you own, without us you’d still be chasing Bush meat with a blowpipe”.

PM Mitsotakis and Turkish President Erdogan speak on the phone

Prof Gopal, who revealed on Thursday that she had been promoted to full Professorship in the English department, was defended by Cambridge University as well as by the University and College Union (UCU).

In a statement, Cambridge University said: “The university defends the right of its academics to express their own lawful opinions, which others might find controversial.

“[It] deplores in the strongest terms abuse and personal attacks. These attacks are totally unacceptable and must cease.”

The Cambridge branch of the University and College Union (UCU) wrote: “Solidarity with Priyamvada Gopal – being targeted with vile sexist and racist abuse for speaking up against white supremacists.

“We are proud to be your colleagues both on the picket line and off it. #BlackLivesMatter #Solidarity.”

However, the university’s support of Prof Gopal has been criticized by some as inconsistent, with some pointing to the recent removal of Noah Carl from a research position at St Edmund’s college over links with far right extremist groups.