The Byzantine frescoes and mosaics in the Hagia Sophia continue to remain concealed from the day it was converted back into a mosque despite Erodogan that they would be uncovered for visitors to see when prayers were not performed.

According to the independent Turkish website kulturservisi.com, although it had initially been announced that – except during the prayer hours – the Hagia Sophia mosaics and murals would be in public view, nothing has been done for 21 days after the conversion of the building into a mosque. 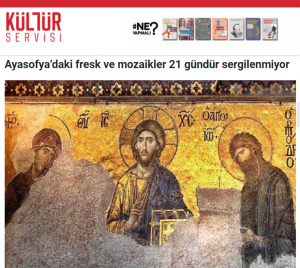 Sources from officials of the Turkish Ministry of Culture, who are still working in the Hagia Sophia, state that there is no official information on when and how murals and mosaics will be exposed to public view inside the monument.