The Austrian commandos, who patrol the Greek borders, found themselves face-to-face with Turkish officers on the other side of the fence

Turkish police officers at the Greek-Turkish borders, couldn’t hide their annoyance for the presence of EU police officers in Evros, alongside the Greek border police keeping Greek borders closed to the hordes of illegal immigrants attempting to cross at the Adrianople area opposite of Kastanies.

The Austrian police commandos of the Cobra Force, who are patrolling the Greek borders in Evros, found themselves face-to-face with Turkish police officers on the other side of the fence.

Some of the thirteen elite members of the Austrian Cobra Force, which has been in Greece since last week, were asked on Tuesday by Turks who were right across them: “What are you doing? This it is not your country“.

We, Readers, are Like Fools: The New York Times huge blunder reporting on the Greek border crisis

According to protothema.gr exclusive information, the Austrian police commandos responded: “Here it is our country and we defend the European borders“. 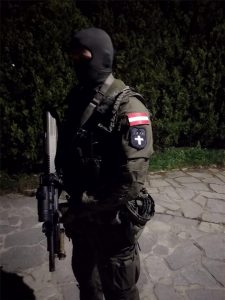 The dialogue revealed between Turkish police and Austrian commandos took place in Evros, just hours before hundreds of illegal immigrants in Kastanies attempted to storm in Greece and Europe under the protection of the Turkish police officers who fired once again teargas grenades to the Greek side for several hours.
Tags With: AustriabordersCobra forceEKAMeueuropeEvrosgreeceillegal immigrantsKastaniesphotospolicepoliticsturkeyworld