In particular, the Greek fighters accompanied the American B-52, flying within the Athens FIR, starting their mission south of Chios and flying over the Cyclades, Peloponnese, Ionian Islands, Epirus, Central Greece, Evia, Spora and Macedonia.

In the framework of the air policing agreement of our country with the Republic of Northern Macedonia, the Greek aircraft accompanied the American bomber during its flight in the FIR of the neighboring country as well.

NATO Secretary General Jens Stoltenberg post about this incident, which was also re-posted by the US Ambassador to Greece, Jeffrey Pyatt.

Today the US shows their powerful commitment to #NATO with six B-52 bombers overflying all 30 Allies. They will be accompanied by dozens of aircraft from across the Alliance. Working together, we fulfil our core mission: to deter aggression, prevent conflict & preserve peace. pic.twitter.com/dJk0g8IHUp

Erdogan’s government partner Bahceli: “War with Greece is only a matter of time”

Turkish Deputy Prime Minister: If the extension of Greek territorial waters to 12 nm is not a cause for war, then what is? 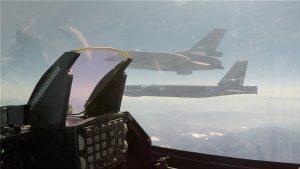 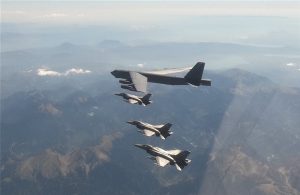 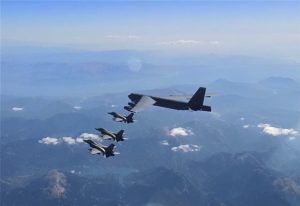 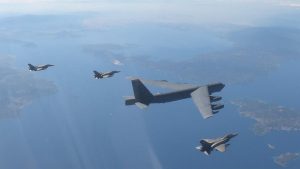 Turkey, however, did not miss the chance to cause a problem again.

The Turkish F-16s, which flew illegally in the Athens FIR, tried to obstruct the flight of the Greek jet fighters, making the crew of the US strategic bomber witnesses of their aggression.

However, this effort of Ankara fail -again- as according to HNDGS’s announcement, the Greek jet fighters recognized, intercepted and chased away the Turkish F-16s from the Athens FIR.

The provocative behavior of the Turkish Air Force (THK) caused the angry reaction of the HNDGS, which with an unusually harsh language referred to Ankara’s propaganda war, noting that with such pirate behaviors the operational capabilities of the Hellenic Air Force are not and can not be disputed, as proved and demonstrated by the recent operations of Greek jet fighters to Cyprus.