She was buried in what is today Zurich and in her ‘Tree Coffin’ 2,200 years ago

2,200 years ago an Iron Age woman was buried in what is today Zurich and in her ‘Tree Coffin’ she was dressed and draped for a ball…in the afterlife.

The ancient Celtic woman’s remains were excavated in March 2017 during a construction project at the Kern school complex in Aussersihl, a district in Zurich. According to the Office for Urban Development in Zurich, the woman was about 40 years old when she died and was found lying in a hollowed-out tree wearing a “fine woolen dress and shawl, a sheepskin coat and a beautiful necklace strung with glass and amber beads.” 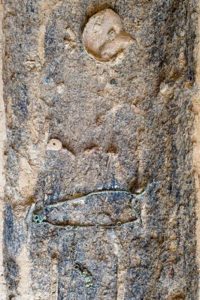 The archaeologists know that the “woman had probably performed little physical labor during her lifetime” and analysis of her teeth suggested she ate starchy or sweetened foods. What is more, fur and scraps of leather had been preserved in the grave and their assembly told specialists that “the woman wore probably a dress made of fine sheep’s wool, about another woolen cloth and a coat of sheepskin.”