Kastro Pergjoni, owner of the Cart & Horses pub in London, where IRON MAIDEN made their live debut in 1976 and recently raised € 15,358 after a campaign in order for original Maiden singer Paul Di’Anno to be able to undergoes knee surgery, posted a new photo of the 63-year-old musician writing that “the situation is getting worse the longer it goes”. 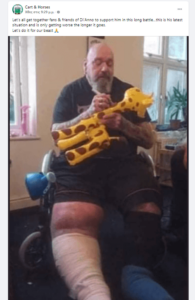 In this photo, Paul, who has been waiting 7 years to have the operation, has a severe swelling in both of his legs. In fact, a doctor from Bangladesh commented under the photo that Di’Anno suffers from advanced untreated diabetes and hypertension, thus complicating his treatment.

The fundraising campaign continues HERE as mentioned above at the initiative of the owner of the Cart & Horses pub, mentioned in the past, after a question about the absence of Maiden from charity events, that using logic, Di ’Anno may have some relationships with members of his former band. Of course the question was aimed at the recent donation for Paul’s knee surgery.

“Iron Maiden have not been in contact with Paul, who certainly has contacts with them, but I really do not know. I’m unaware of Iron Maiden’s abstention from charity activities”.

Let’s wish that everything goes well for the emblematic former singer of IRON MAIDEN! Up The Irons!