He remains in hospital in stable condition

Two hooded men had set an ambush on the journalist and publisher Stefanos Chios outside his house in Vrilissia.

Shortly after three in the morning, while returning home, Stefanos Chios was shot twice in the neck and ribs, while two more bullets hit his car.

According to information, as soon as Stefanos Chios appeared, one of the perpetrators approached him while the victim was still in his car and shot him twice almost point-blank from the driver’s side window. 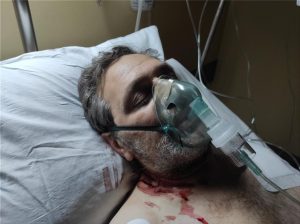 The journalist reacted immediately, opening the door of his car forcefully, which hit his would-be killer and somehow jammed his weapon. He started shouting and he was heard by his wife who hurried to see what was happening.

The journalist then appeared covered in blood at the Sismanogleio Hospital and from there, the doctors transported him to the KAT hospital where he remains for treatment in a stable condition.