NGC 3254 was first spotted in March 1785 by astronomer William Herschel, about 118 million light-years from Earth

A stunning photograph of the galaxy named NGC 3254 was captured by NASA’s Hubble Space Telescope.

The Seifert Galaxies make up 10% of all galaxies and were named after the American astronomer Carl Seifert, who first studied them in the 1950s.

Seifert Galaxies are a type of galaxy, which includes an extremely bright small nucleus, which sometimes exceeds the brightness of the entire surrounding galaxy. According to NASA, these types of galaxies have “extremely active nuclei” and belong to the “active galaxies”. 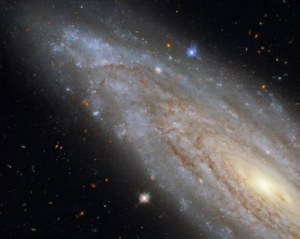 The photo of NGC 3254 is a composition of infrared and visible images. On the one hand it refers to a typical spiral galaxy. However, it is actually a Seifert Galaxy, which can be best seen in light outside the visible spectrum, according to NASA.

These celestial objects release gases, dust, stars and planets, which they pull and eventually destroy. NGC 3254 was first spotted in March 1785 by astronomer William Herschel, about 118 million light-years from Earth.
Tags With: galaxyHubble Space Telescopenasaspace