The holidays of Sheikh and former Prime Minister of Qatar Hamad bin Jassim bin Jaber Al Thani, who once again chose the beautiful island of Skiathos, started early this year. On Saturday morning, the luxury yacht of Al Mirqab anchored at Maratha beach, a stone’s throw from Koukounaries.

The former PM, whose net is estimated at $1 Billion is on the island of Papadiamantis for a short vacation with family members and friends. His presence was immediately noticed by islanders and tourists alike, as his $300 million, 133-meter luxury yacht Al Mirqab features two swimming pools, a helipad, five suites, a gym, a jacuzzi, and a movie theatre.

The size of the boat does not allow him to anchor in the port and the port authorities have informed the Greek captain to anchor it off the beach between Koukounaria and Maratha. So, anchored this morning in the bay of Maratha coast, awarded for many years with the “Blue Flag” and opposite the luxurious emblematic hotel “Skiathos Palace”, being a topic of discussion and admiration from the world, locals, and tourists, are getting a glimpse of the yacht. Al Mirqab is one of the twenty largest motor yachts ever built. 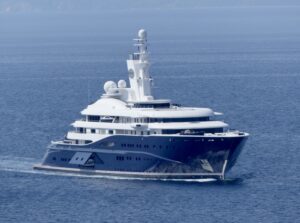 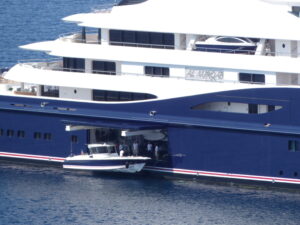 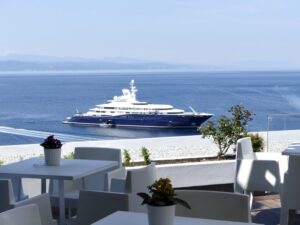