The American aerial mission over battle-scarred Western Europe may have been short and sweet, but one pilot managed to stand out from the rest of his compatriots.

Despite only entering World War II in May 1944, Robin Olds is credited with 12 German planes shot out of the sky and 11 destroyed on the ground – a feat that marks him out as one of the most prolific American pilots during their time fighting the Germans.

In many ways, Olds was born to do something impressive with his life, and his upbringing was certainly one that revolved around making the most of his abilities. 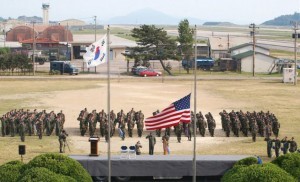 (Commemoration event by the 8th Fighter Wing at Kunsan Air Base June 19, 2007 to honor the memory of Olds)

Born in Honolulu, Hawaii, Olds was raised by his father after his mother, Eloise, died when he was only four years old. His father was Major General Robert Olds, who was a combat pilot in World War 1, and his whole life was geared towards making a name for himself in the military.

Robin first flew in a plane at the tender age of eight, in an open cockpit biplane that was operated by his dad, and from the age of 12 his only aspiration was to attend the prestigious military academy West Point – where he hoped to play American football and work towards becoming a combat pilot.

And indeed, Olds was accepted into the school on June 1st, 1940 after picking up a conditional commitment for nomination from Pennsylvania Congressman J. Buell Snyder. By this point, the conflict was already raging across the Atlantic ocean as the Nazi war machine began to consolidate its grip on Western Europe.

His football career went well, but his flying career went even better – and despite being inducted into the College Football Hall of Fame in 1985, Olds will still always be more famous for his exploits in the sky during WWII and the Vietnam War.

Three years after entering West Point, Olds was granted his wings by General Henry H. Arnold. In the same month that German and Italian operations in North Africa ended with the capture of 250,000 Axis troops. In 1944, he started to fly combat missions against the Germans over the skies of Europe.

Olds arrived at RAF Wattisham in England on May 15th, 1944 as part of the 479th Fighter Squadron and he began to fly bomber escort mission and sorties to attack transport targets in France, aiming to soften up the enemy before the invasion of Normandy.

It took him the best part of three months to shoot down his first enemy aircraft, and it wasn’t until August that he down a pair of Focke-Wulf Fw 190s while on a low-level flying mission to France. Once he got that first kill, they began to come thick and fast – and showed the daring nature of the pilot. 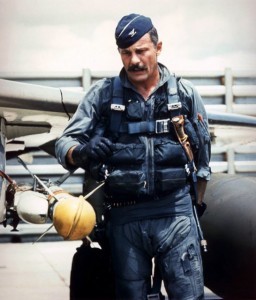 On August 25th, Olds came across 40-50 Messerschmitt Bf 109s, flying in a three V-shaped formations. The pilot immediately turned his flight in pursuit of the enemy and embarked on an exhilarating ten-minute chase in which they climbed above and behind the Germans.

Just as Olds and his wingman got into position to launch a devastating attack, they jettisoned their fuel drop tanks and dropped onto their prey from above – but in the midst of all the action Olds forgot to switch to his internal fuel tanks and his engine died.

Incredibly, the pilot continued attacking, fatally damaging one Messerschmitt and before he proceeded to dive calmly away and restart his engine. In total, he shot down three enemy aircraft – two in the actual dogfight and one on his way home. He would become the first ace of his flight squadron. 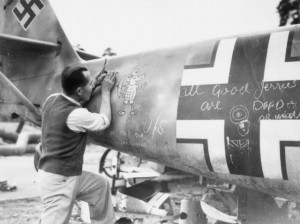 (A member of staff at a technical college preparing to remove the ‘Mickey Mouse’ staffel emblem from the rear fuselage of a shot-down Messerschmitt Bf 109E4, ‘Red 2’, of 3./LG 2)

Throughout the whole war, Robin flew 107 missions and was credited with 12 confirmed kills in the air and 11 planes destroyed on the ground.

Olds also found glory in another theatre of war, half a world away from Western Europe but not a million miles away from the ideals that he fought for. And so it was that the pilot found himself in the Eighth Tactical Fighter Wing, which scored 24 kills in the conflict – the best result out of the whole air force.

Perhaps his finest moment came during that second conflict, on January 2nd, 1967, when he created a trap for enemy MIG aircraft called Operation Bolo.

The plan, which was painstakingly planned and executed, involved the use of radar-jamming and exclusionary tactics to appear as if F-4s, which were faster and more agile, were actually the slower and more vulnerable F-105s. It worked beautifully, and the enemy fell into the trap – seven were shot down. 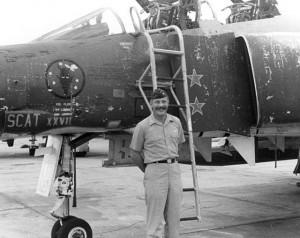 That moment led to widespread acclaim in the American press, and the New York Times called him “everybody’s choice as the hottest pilot of the Vietnam War,” while the History Channel aired a special television animation that came complete with commentary by Olds himself on the battle.

It’s remarkable that in all that time flying dangerous missions, Olds never received the Purple Heart medal – awarded to anyone killed or wounded while serving in the United States military.

Olds ended up with a tally of 16 confirmed kills across the two wars – no doubt he would have had more but was denied the pleasure of serving a combat role in the Korean War. His career that took him away from the front line the to final commission of Brigadier General that would last all the way until 1973. 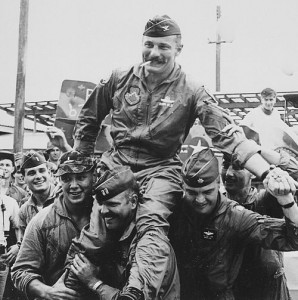 The pilot was married twice and was survived by two daughters, a half-brother, and a granddaughter. For his dedication to service, his final plane was retired and is now on display at the National Museum of the United States Air Force in Ohio.

On the evening of June 14, 2007, General Olds died from congestive heart failure in Steamboat Springs, Colorado, one month before his 85th birthday.