The Turkish Minister Hulusi Akar flew with an F-16 after threatening France that “they will come, and they will go as they came”

The game in the Eastern Mediterranean is getting dangerously complicated.

A few hours ago, Turkey issued a NAVTEX for the Eastern Mediterranean region, warning of live-fire exercises of the Russian fleet.

It is a question of whether the Turkish fleet will participate or not.

Practically, with this NAVTEX, Ankara is informing the research vessels Barbaros and Oruc Reis that are sailing in the areas where the Russian exercises will take place, as it is also noted in the relevant information.

The publication of a Greek website tourkikanea.gr of the information that Anadolu journalists traveled from Rhodes to Kastellorizo, irritated the communication director of the Turkish presidency, Fahrettin Altun, who accused Greece of “targeting” the employees of the Turkish news agency. Altun, in a provocative tone, warned Athens that it would “pay the price” if the Turkish journalists on the island are hurt.

The Greek website claims that the Turkish journalists as operatives of the Turkish National Intelligence Service (MIT). 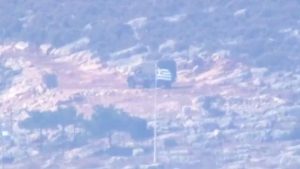 “We condemn the efforts of the Greek authorities to incite violence, through a fascist website, against Anadolou journalists in Kastellorizo. When the Greek journalists work freely in Turkey, which the EU loves to give lectures to about freedom of the press, Greece, an EU member, acts as a mafia state”, he added.

Following the government’s strategy closely, articles in the Turkish media continue the propaganda about the “militarization” of Kastellorizo, which -according to their claims- contradicts the International Treaties. On Wednesday, the state-run TRT World recorded the activities of the Greek military in Kastellorizo, with a special camera from the opposite Turkish coast in Kas. According to TRT World, the footage is of Greek soldiers patrolling the island.

“His brain was so compromised”: Robin Williams’ widow describes his “devastating” final days in new doc

The Turkish Minister Hulusi Akar flight with an F-16

The Turkish Defence Minister Hulusi Akar had the opportunity to be close to the new Turkish pilots and to give another inflammatory speech on the occasion of the launch of the training season 2020-2021.

Among other things, he said that the Turkish Armed Forces have fulfilled their mission and will continue to do so, and noted that “we are going through a very sensitive period, very critical, we will defend our rights and interests, on land, air and sea”.

At the same time, the Turkish Minister of Defense in his statements targeted France and the USA, provocatively stating that “in the Eastern Mediterranean, some people come from distances of thousands of kilometers and pretend they are tough and play the role of the protector and that of a “shield”. They will come, and they will go as they came. If you are trying to change the balance in the area, after the decision to lift the embargo in southern Cyprus, this will not bring peace but conflict, it will not bring the solution but the non-resolution of the issue”.