The rising and falling trends of alcohol around the world

A study published in medical journal The Lancet this week has found that alcohol consumption is increasing across the world. Between 1990 and 2017, the total amount of alcohol grew from 21 billion liters to 35.7 billion liters, an increase of 70%. Low and middle-income countries are the driving force behind the trend with consumption going up 34 percent in Southeast Asia between 2010 and 2017. Moldova is the country with the highest rate of consumption with its inhabitants consuming 15 liters of pure alcohol every year on average in 2017. Kuwait was lowest with 0.005 liters consumed per year. The trend is expected to continue up to 2030 when Europe is no longer expected to have the highest levels of alcohol consumption.

Between 2010 and 2017, a swathe of low and middle-income countries saw their alcohol consumption levels go up with Vietnam, India and China all posting noticeable increases. The following infographic takes a look at the trend during that seven-year period, focusing on a selection of countries from The Lancet’s study. In Vietnam, alcohol consumption skyrocketed nearly 90 percent while India also recorded a dramatic 37.2 percent increase. In many developed countries such as Spain, the UK, Canada and Australia, people have started drinking less. In Russia, consumption also fell 3.5 percent. The research also looked at the share of people worldwide who abstain from alcohol completely. The prevalence of abstinence fell from 46 percent in 1990 to 43 percent in 2017. 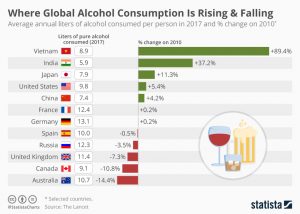