The items were taken to Eeretria for dating and preservation

A box-shaped tomb in which three burials had taken place, was unearthed in Nea Styra, Euboea, during sewerage works. Despite the fact that the tomb was partially disrupted by previous works, the findings excavated from inside, such as vessels, coins, etc., can provide useful information about its dating and the history of the area.

The tomb was made of a local brown slate. The long slabs on the south side were kept in situ, on the side of the trench and part of the cover. The slabs of the other sides, as well as part of the cover, had been removed from previous excavation works. The external dimensions of the tomb were 2.00m. (A-W) x 0.45m. (N-N), in a pit, carved in the soft natural slate. Three burials were located in the box.

In the first burial,  the dead man was placed in a supine position, with his left hand slightly bent at the elbow and the maximum surviving length was 1.35 m. North of the skull, part of a glass vessel was found as well as a small amount of ceramics. 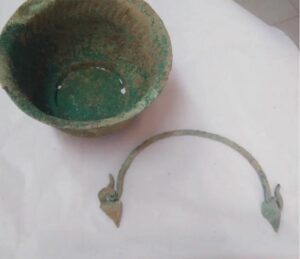 Near the western limit of the burial, pelvic bones and lower extremities were found, a fact that documented the existence of recovery within the tomb. The existence of bones outside the tomb to the south, under the deck of the modern road, necessitated the widening of the trench, in order to establish the possible existence of a second tomb. No second tomb was found.

The items of the tomb were transferred to the Conservation Department of the Archaeological Museum of Eretria, for preservation and dating. As the five glass censers have been saved intact and constitute a unit, from which interesting data on their typology and use can be extracted.  The Ephorate of Antiquities of Evia is already planning its exhibition at the Archaeological Museum of Karystos.