A driving feast of 1000 kilometers, excellent Peloponnesian routes and the opportunity to visit some of the most beautiful areas of Greece

The Motor Sports Association TRISKELION and the Hellenic Historic Car Club (ELIA) organize for the 8th consecutive year in the Peloponnese the Historic Car race called “Tour du Péloponnèse” from 3 to 21 October.

The Tour du Péloponnèse, is a Regularity race that offers fans of the classic car a driving feast of 1000 kilometers, excellent Peloponnesian routes and the opportunity to visit some of the most beautiful areas of Greece.

The racing leg is expected with great interest since TRISKELION has been established internationally for the selection of quality routes and the perfect organization that includes roadside assistance in case of unexpected incidents and online results services. With 80, mainly international but also Greek crews having already declared participation, the “battles” in the special routes are expected to be “epic”. 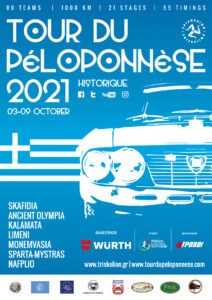 The preparations of the Organizing Committee of the Tour du Péloponnèse are intensified as there are now almost 20 days left for the start of the largest international historic car event in Greece in participations, duration, distances and number of special routes!

The briefing of foreign crews will take place on the first day of the event, Sunday, October 3, at the Aldemar Olympian Village Hotel in Skafidia (Ancient Olympia).

The festive start will take place in Ancient Olympia on Monday, October 4 at 11.00 with the support of the Municipal Authority. The participants will head to Andritsaina and Vasta with a final destination in Kalamata, competing in 4 special routes. It will be preceded by a morning tour of the participants in the archeological site and in the stadium of the first Olympic Games in Ancient Olympia.

On Tuesday, October 5, the adrenaline rush! Starting from Kalamata with the program including 4 special routes through the wonderful landscapes of Mani and in the direction of Areopolis and regrouping in Marmari. Our final destination is Limeni.

On Wednesday, October 6, the crews start for another racing day. Wednesday’s leg includes 4 more special routes with the competitors enjoying some of the most beautiful coastal routes in Greece. Reconstruction in Plytra and finish in the imposing Monemvasia.

On Thursday, October 7, we continue with landscapes of wild beauty. Another 4 special routes crossing Ierakas Kyparissi (where the regroup area is) and then Fokianos, Geraki and finish in front of the statue of Leonidas in Sparta and the municipal authority as a whole to welcome the competitors.

On Friday, October 8, the contenders for the trophy will start from the Statue of Leonidas in Sparta to take part in 4 more special routes in mountainous Arcadia to Ancient Tegea with a final destination in Nafplio, while in the evening the most famous night special test under the castle of Argos will judge this year’s winner.

Finally, on Saturday, October 9, the crews will remain in Nafplio, while in the evening the award ceremony will take place at FOUGARO. The seventh and last day of the event is the departure day of the foreign crews.

The Tour du Péloponnèse takes place under the auspices of the Municipalities of Ancient Olympia, Sparta, Tripoli and Nafplio and is sponsored by WÜRTH HELLAS SA.