U.S. Air Force F-35A Joint Strike Fighters and F-15E Strike Eagles dropped 36,000 kilograms, or nearly 80,000 pounds, of bombs on an island in Iraq’s Tigris River that ISIS had been using as a transit hub to move men and materiel from Syria and other points west deeper into Iraq. However, an official press release from the U.S.-led coalition fighting the terrorists in Iraq and Syria did not say that strikes had killed any militants or destroyed any specific targets. At the same time, the statement’s wording suggests the airstrikes may have actually been a so-called “terrain denial” operation to simply blast away vegetation and other natural cover that might have offered concealment for ISIS, also known as Daesh, and their supply caches. 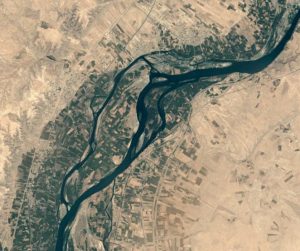 (A dated satellite image from 2002 offering a closer view of the general area, with Qanus Island, almost entirely covered in green foliage, at center)

The strikes occurred on Qanus Island in the Tigris on Sept. 10, 2019. Qanus is approximately 175 miles northwest of Baghdad, some 55 miles southwest of the Kurdish regional capital in Erbil, and around 100 miles east of the Syrian border. The sorties were ostensibly supporting the 2nd Iraqi Special Operations Forces (ISOF) Battalion’s still-ongoing ground clearance operation, nicknamed Operation Black Dirt, to root out ISIS elements in the area. 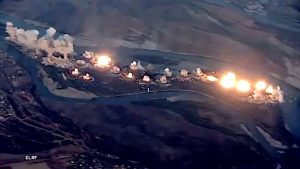 Though the U.S.-led coalition, known formally as Combined Joint Task Force-Operation Inherent Resolve (CJTF-OIR), declared that it had destroyed the terrorist’s “physical caliphate” in December 2017, the group has continued to be a persistent security threat in both Iraq and Syria.