“I’m not an American. I do not want to be the face of the NBA, but to be Giannis and work. For the National Team I wish we had qualified”

Shortly before 12:30 the press conference started which lasted until 13:05.

Thanasis Antetokounmpo started first, thanking everyone during the season but also all those who have supported his family from the first moment they started playing basketball.

Giannis Antetokounmpo said “we are happy to be back. Where we can bring the cup to Greece. We had to go through a long process for that. It is one of the biggest trophies in the world and it is currently in Greece. We do not know how many days we will stay here but we will take it with us to the places where we grew up, in Sepolia, in Zografou”.

Why are women attracted to deep-voiced men? (video)

Giannis Antetokounmpo continuing said, “I had people next to me who believed in me and helped me be better. The best feeling I have felt so far is when I became a father, not compared to the NBA championship. And I will be a father again soon. If you told me 8 years ago that today I would be here with Thanasis and we would go to the NBA trophy wherever we want, I would call you crazy”.

As he said: “We do not stop, we have not stopped even for a day. We work constantly, we do not stop, we learned it from our parents. We came back from school, from training and we saw our parents not stopping, so neither did we. What we experienced does not come without hard work. We do not know what the ceiling is. Every year we surpass what we did last year as a family and we will continue what we do. All I know is that I will get up and go to training, as will Thanasis”. 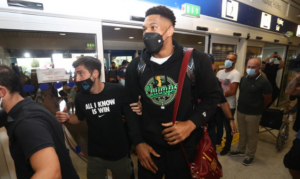 “I wish we could play in the Olympics now and not be here. I want to do my job and go home to my family. I’m not interested in being the face of the NBA. I’m not an American. I do not want to be the face of the NBA, but to be Giannis and work. For the National Team I wish we had qualified. I really want to help the National Team in any way so that we can do something great in the future. To have good players, good coaches, a good system and to properly represent the flag. The next thing I want very much”.

At the end of the press conference, Giannis Antetokounmpo made a revelation. In the next few days, they will go down to Sepolia where they grew up and have the trophy with them. “We will play basketball for a while and we will bring it with us so that the children will enjoy it as well as the people of Sepolia”.
Tags With: athensbasketballGiannis AntetokounmpogreeceNBAphotossportsThanasis Antetokounmpotrophyworld