The Greek Air Force recently added a formidable weapon in its military deterrence against Turkish provocations as it incorporated the Rafale F3R fighter jets that are distinguished for their advanced operational capabilities.

The great advantage the French fighters provide is none other than the long-range air-to-air missile Meteor. Meteor is the next generation of Beyond Visual Range Air-to-Air Missile (BVRAAM) system designed to revolutionise air-to-air combat in the 21st Century.

The weapon is also equipped with data link communication. Aimed at meeting the needs of a network-centric environment, Meteor can be operated using third-party data, enabling the Meteor user – the pilot – to have the most flexible weapon system. 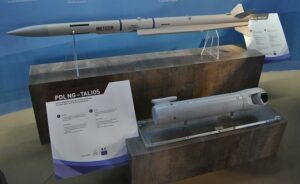 The first of a total of 18 Rafale F3R fighter jets to join the Air Force arsenal was received at an event held at the Dassault Aviation facility at Istres – Le Tubé Air Base in southern France, last Tuesday.